Brusselsfrom the 8th of November

with a new cycle of monthly meetings in the new venue Reset.

European Lab is coming back to Brussels and invites Elie Barnavi, historian, former Israeli diplomat and co-founder of the Museum of Europe in Brussels, and young senior official Chloé Ridel will discuss the geopolitical challenges related to the war in Ukraine. 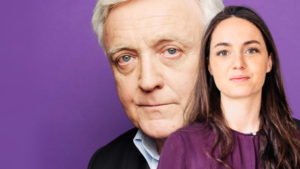 Born in 1946 in Bucharest during the aftermath of World War II, Elie Barnavi is a historian, essayist, former Israeli diplomat, Professor of European Early Modern History at Tel Aviv University (emeritus), and co-founder of the Museum of Europe in Brussels. In his memoirs, recently published by the Editions Grasset, Confessions d’un bon à rien (2022), he gives an account of his life full of historical research and commitment towards peace, Europe, equality and freedom. The Ukrainian tragedy deeply resonates with his pacifistic viewpoint, on top of the fact that his family originally hails from the neighboring Bessarabia.

Chloé Ridel, born in 1991, is the deputy director of the Institut Rousseau, a think-tank dedicated to environmental and democratic reconstruction of our societies. She worked for several years as a senior official at the heart of European institutions in Brussels, Paris and Bucharest. Moreover, she wrote Une guerre à l’autre, L’Europe face à son destin, published by Les Éditions de l’Aube (2022). As the Second World War was the starting point of the building of a European peace, she wonders if the Ukraine War could be the start of a powerful Europe, capable of defending its interests and its model of civilization?